This recipe for Vegan Chocolate Hazelnut Nutella Cinnamon Rolls is sponsored by So Delicious Dairy Free. All thoughts and opinions are entirely my own. 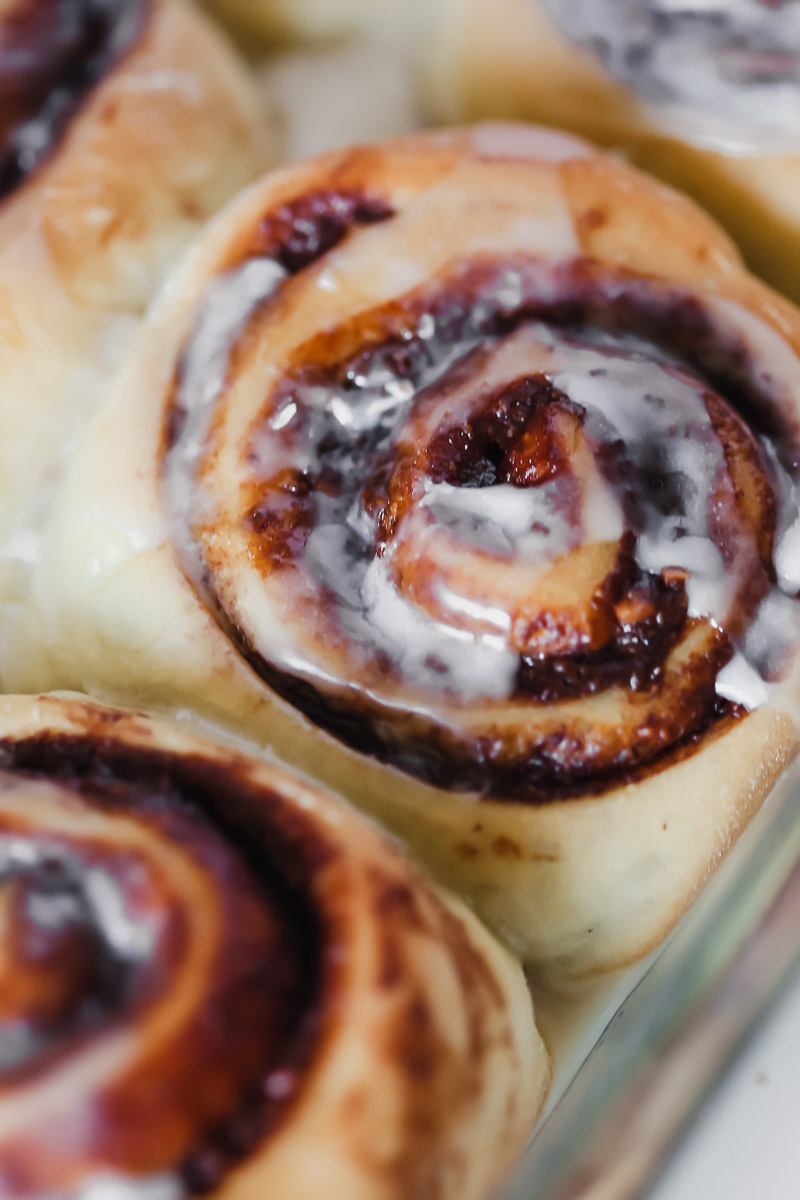 Cinnamon rolls. Cinnamon buns. Whatever you want to call them! How about moist, fluffy, sweet, drool-worthy little breakfast desserts? I mean, whoever allowed something so decadent to pass as a breakfast food is my true hero in life. 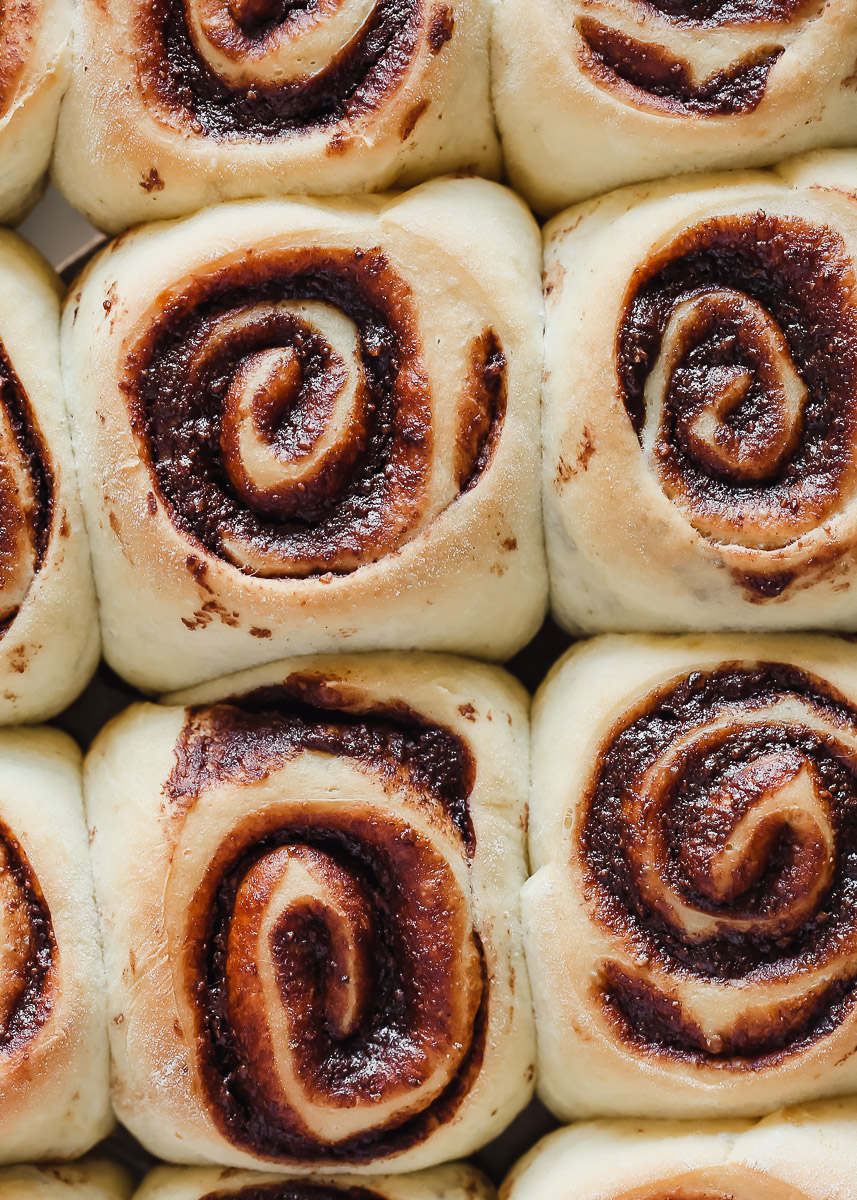 This recipe for Vegan Chocolate Hazelnut Cinnamon Rolls is sponsored by So Delicious Dairy Free, a brand we absolutely looooove. We use their coconut milk creamer for our coffees every morning. We also have an almond ricotta cheese recipe that uses a few tablespoons of their unsweetened coconut yogurt. 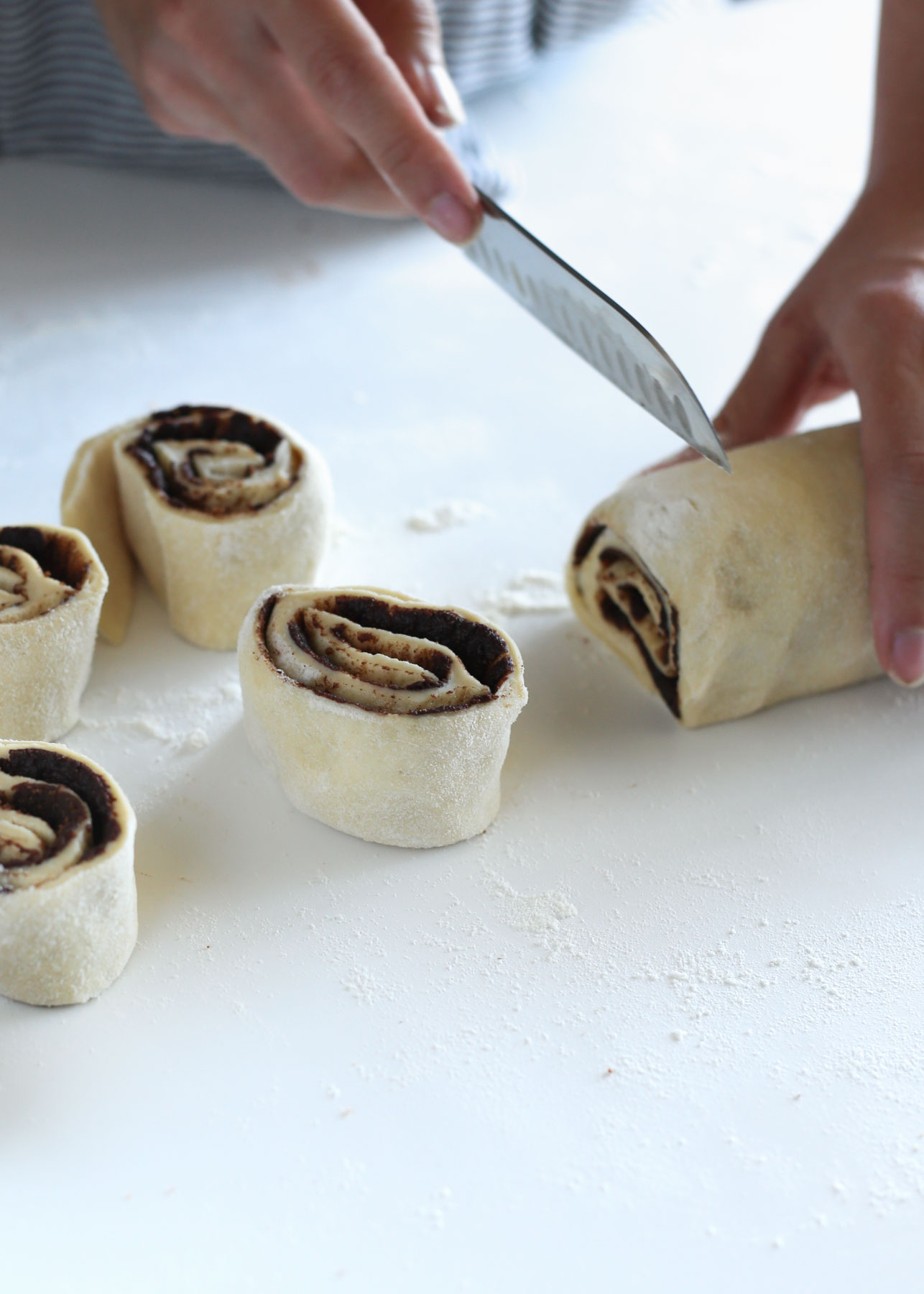 These Vegan Cinnamon Rolls take breakfast #GOALS to a whole new level because they are stuffed with a creamy, chocolate hazelnut spread. We then topped them with a smooth, sweet, sugar glaze – yaaasss ?!!

To eat cinnamon rolls, I like to peel and eat each outer layer because we all know the BEST part of a cinnamon roll is the soft, juicy, extra cinnamon-sugar-sweet, center. Matt just takes a huge bite out of the roll like it’s some kind of donut – uhhhh ?. Unwinding each soft layer is the way to go, my friends.

Cinnamon rolls might seem a little involved because you have to let the dough rise twice, BUT I promise you it’s actually pretty easy. Also, making the Vegan Chocolate Hazelnut spread while the dough rises is so simple and fun. It’s a real treat compared to original cinnamon. 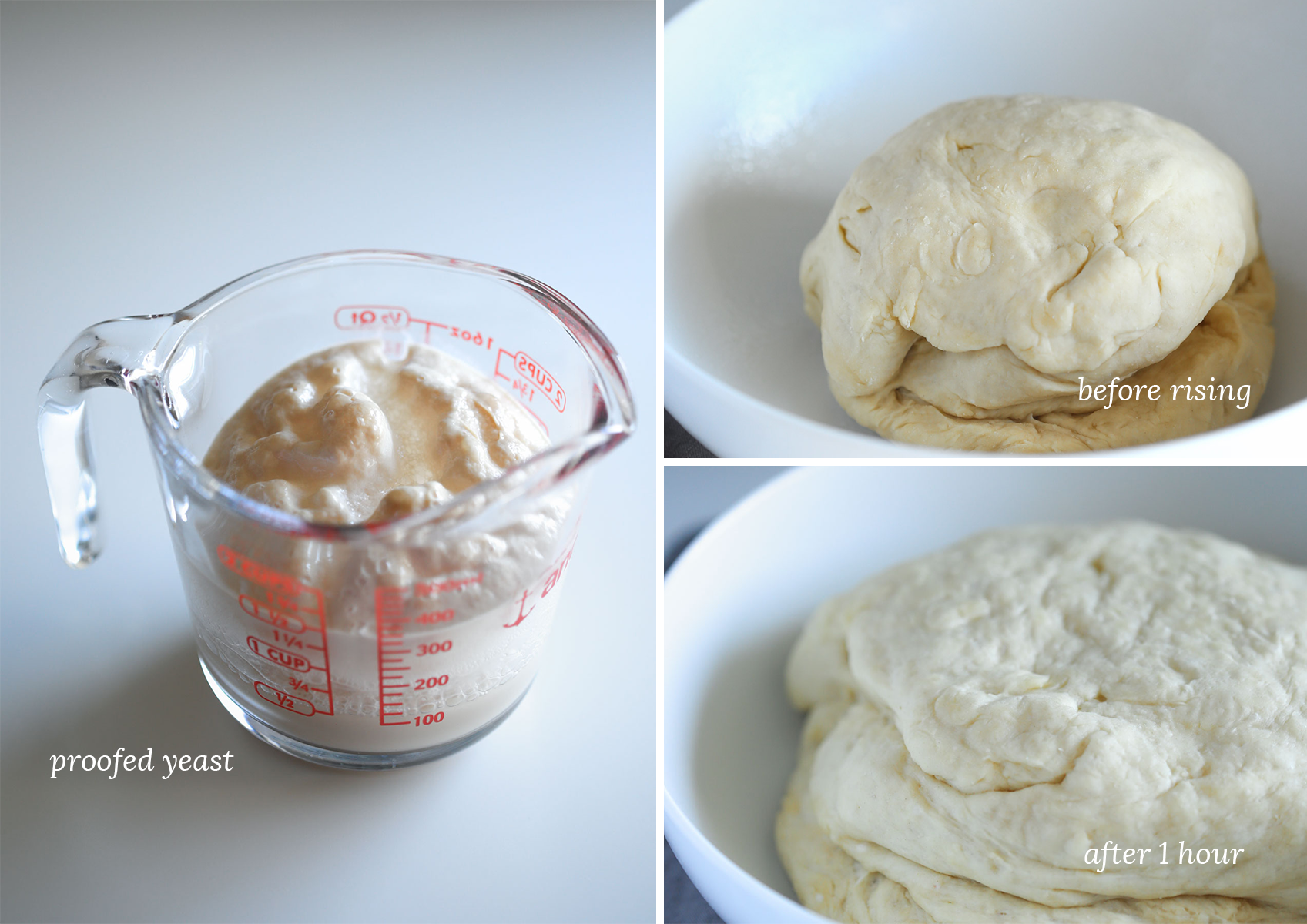 I used instant yeast and proofed it for about 10 minutes in warm water. If your yeast doesn’t foam up then you probably got a bad batch or the water either wasn’t warm enough or maybe too hot. Don’t be intimated though! I never measure the temperature of my water and the yeast always comes out fine. I usually mix together water from the hot and cold taps until it feels like lukewarm bath water. 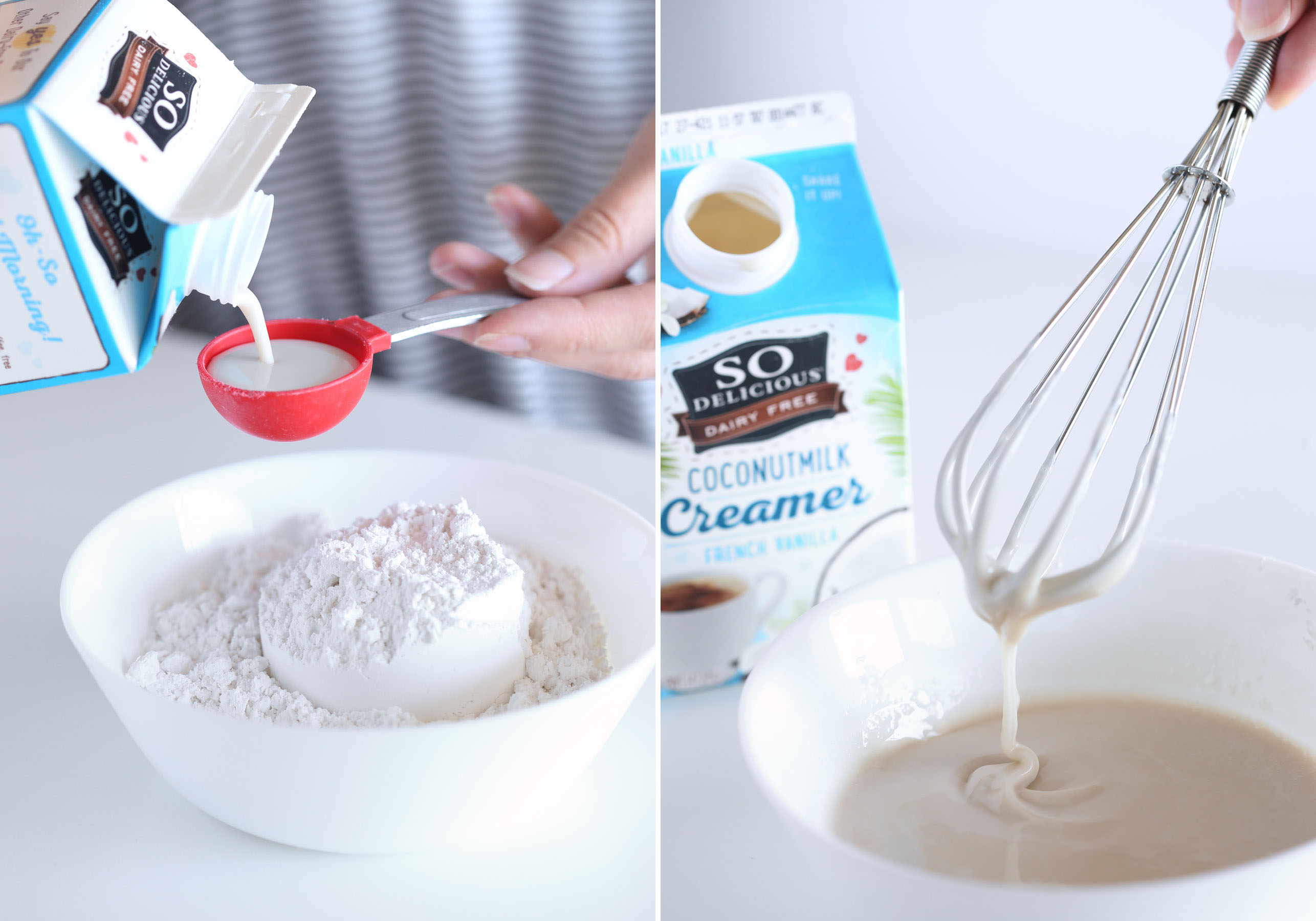 To make the dough, we used So Delicious French Vanilla Dairy Free Creamer which is a sweetened creamer. This way, the dough was wonderfully sweet and had a tad of vanilla flavor without us adding any extra sugar to it. We also used the creamer for the glaze – DELICIOUS! 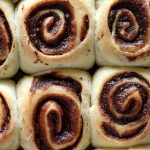 This recipe for Vegan Chocolate Hazelnut Nutella Cinnamon Rolls is sponsored by So Delicious Dairy Free. All thoughts and opinions are entirely my own.

Our Favorite Vegan Pasta Sauces
1. cauliflower walnut bolognese
2. roasted red pepper sauce
3. nut-free pesto
4. pumpkin curry pasta
5. creamy cauliflower alfredo
Our Most Popular Recipes
COPYRIGHT
We love when you share! All of the images and text on this site are the property of Pasta-based. Feel free to share photos and quotes with a link back to our original post. Please do not share entire recipes, large bodies of text, or edit photos in any way without first obtaining permission from us. Social media shares are always welcome.
AFFILIATE LINK DISCLOSURE
On this site, we sometimes use affiliate links. This means that if you were to make a purchase through one of these links, Pasta-based would receive a small cut, at no cost to you. This helps support the work we do here. Thank you!
© 2022 Pasta-based | Privacy Policy
4K Shares
Pin3K
Share879
Tweet